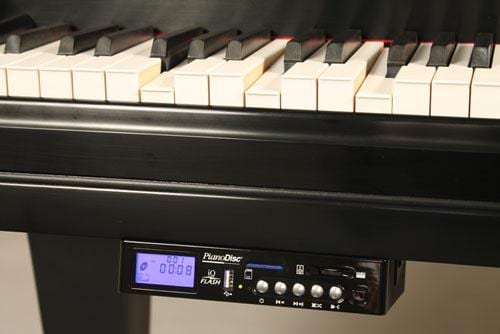 PianoDisc is said to be the top company that produces player piano systems and considering their massive, global dealership network you can say they cover the Earth with piano music.

It was only in 1988 that the company was founded and soon spread everywhere.  They made their name an industry wide one of exemplary standards of excellence and service.  They started out as a small sized retail store in sunny California, Sacramento to be exact. The owners were Gary and Kirk Burgett.  The brothers started their dream in 1979.  Both were experts in the piano field, one being a musician with a successful music studio and the other a professional piano technician as well as a rebuilder.

Originally the company was named after them, Burgett Pianos and they worked at it night and day and came up with an innovative product named PianoCorder that used a cassette player that would be added to any piano.  After field testing the PianoCorder in stores, homes, and malls, the public reaction was super positive.  This enabled them to expand and the PianoCorder ended up being about 40% of their overall revenue.  Then the claim panned out even better in 1988 when Yamaha rolled in and bought the rights to the invention, taking it off the market so to develop their own version.  Taking the initiative they set out to come out with something new.  They had to because without the PianoCorder they had no product to sell nor did their dealers.

To battle this they came up with the worldwide success of the PianoDisc. It works similarly and has well over 4000 recordings of the best pianists and compositions in the world.  Now people and businesses have the devices and that satisfies everyone.

The success story of the Burgett brothers is case in point of what American ingenuity is all about.  Working together the two grew from a small operation into a worldwide phenomenon.  The result is now people all over the world can purchase and use their PianoDisc system and enjoy the best in piano music.  Their service and consideration as to what the customer wants is considered unequal in the field.  This comes from teamwork and the commitment to excellence in craftsmanship and engineering.  Not too many companies can make the claim of the PianoDisc creators and that is a testament to their fortitude.