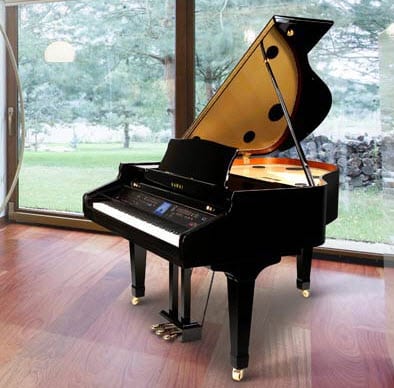 Who would have thought that way back in 1927, a wagon maker would end up starting a musical instrument company that would become a legend in fine craftsmanship and performance almost a century later?

That’s the history of the Kawai Musical Instruments Manufacturing Company, Ltd located in Hamamatsu, Shizuoka, Japan.  They’re renown for their masterful piano line and electronic keyboard line.  With over $1 billion in sales annually, you can’t deny that Kawai is a leader in the field of finely made musical instruments especially their grand pianos and upright pianos.

It was in the 1970s that Kawai broke the mold in making musical instruments out of alternative materials.  This was done in order to optimize better performance.  The use of ABS, acrylonitrite butadiene styrene, a composite for special parts used in its pianos.  This replaced wood that couldn’t stand the strain.  Wood gets compromised by heat, moisture and other stresses so the composite not only solved the problem but also has become the benchmark that led Kawai to the top of the industry.

Later, in 2002 the new Millennium III grand piano using the new ABS/carbon fiber.  This new composite not only increased the strength and durability of the Kawai products thus improving the performance they were looking for.

Over the decades Kawai has introduced new models, each an improvement over the last and continues to do so to this day.  The industry stays on top of whatever new innovation Kawai produces as they know that the company will lead the pack in high end quality and performance.  Performers relish the new innovations as they then become the first to use them and field test them in front of their audiences as well as in the studios.

Ever since, Kawai grand pianos and their other line of products are the standard that other companies are compared by.  The musicians and studios that demand Kawai know the difference between a well crafted instrument and not.  The fact that one will find these instruments in the great halls of music as well as on the stage used by the top stars of today.  Since outdoor events can take a toll on an instrument made with wood parts, the composites that Kawai uses not only stand the test but outperform the standard.  This saves time and money as the instruments need less maintenance and replacement.