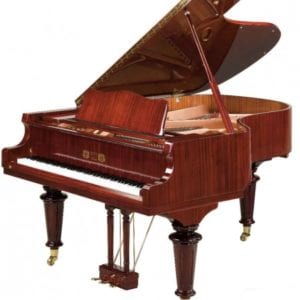 The Perzina Piano has a special place in history and not just because it’s one of the finest of musical instruments.  It’s because these pianos have altered history for the better and are still of high demand to this very day.

Way back in 1871, July 1 as a matter of fact two brothers, Julius and Albert Perzina began their place in history.  It was in a small German town Shwerin where they decided to set up shop and change the face of music.  The “Brothers Perzina” was the name of their shop and they began to produce their pianos much to the delight of the country.  Soon their names were of household fame and a hallmark of German craftsmanship.  The excellence of their piano manufacturing caught the ears of Europe’s most prestigious musicians and soon everyone and their brother had to have one of the Perzina Pianos.  In just a matter of years the Brothers Perzina’s piano ship became the biggest piano factory in Northern Germany.  Heads of State, royalty, the wealthy, schools, churches, all had to have one of the Perzina Pianos and soon the hills were literally alive with the sound of music.

Their fame and reputation didn’t stop there. For now, over 140 years later their legacy is bigger and better.  So much so that famed businessman Ronald Bol purchased the factory and all rights and has continued to produce these fine instruments to this day.  A new factory was built, more workers employed and the reach and demand for the Perzina Pianos hasn’t waned a bit.  Never shirking from the excellence in craftsmanship nor integrity in business, the Perzina Pianos continue to be the hallmark of excellence in the piano manufacturing and in musical instrument and craftsmanship altogether.  One might come across a phrase or two comparing general excellence to the Perzina Brothers and their pianos.  It’s because the tried and true ethics of patience, design, choice of materials and integrity has kept the name of Perzina Pianos in the forefront.

Just looking at their trademarked design of using the vertical model and floating soundboard.  Floating plate and of course the reverse or concave crown design soundboard makes the Perzina Pianos probably the most duplicated of piano designs and engineering.  As close as others might come there still is no substitute for a finely made piano like Perzina Pianos.