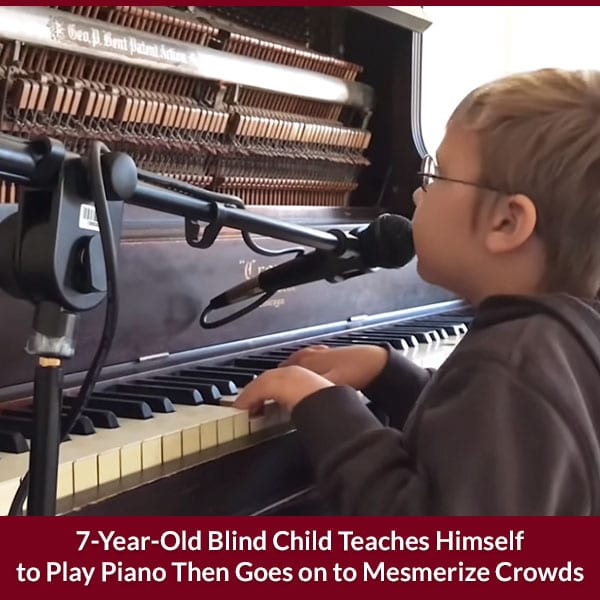 There’s a 7-year-old self-taught piano prodigy living in Dayton, Ohio today. Avett Ray Maness is determined that he won’t stop until he accomplishes his dreams and nothing, not even the fact that he’s blind, will slow him down or stand in his way. This is something that the people around him are loving as they listen to his renditions of classic songs like “Happy Together” and “Bohemian Rhapsody.” People who watch him playing piano in front of massive crowds are so impressed that even his own mom says she sometimes forgets that he’s her son. She admits that she becomes a total “fan girl” who needs to be pinched so she can return to reality.

Who Avett Ray Maness Is

Avett was born with optic nerve hypoplasian (ONH). This is a congenital disorder that leaves the optic nerve underdeveloped. Being blind has affected the way that Avett learns and interacts with the world around him. This is because when we who are visually able see something our body reacts in a way that a blind person’s body can’t react. For this reason, blind children need to get more stimulus by rocking back and forth or spinning in circles. Doing so helps them focus and balance.

His mother goes on to explain that for Avett this was the piano. In fact, as soon as he could reach the piano’s keys, he was a natural when it came to playing piano. He started by teaching himself how to play “Twinkle Twinkle Little Star” when he was only 11-months-old. He’s also managed to teach himself how to play guitar and has an instructor who teaches him new techniques with both instruments.

Avett’s Take on the Situation

Avett says that he enjoys singing and playing piano because it makes those around him happy. This is why it doesn’t bother him to perform before crowds of thousands of people. He says he hopes that by doing so he’s inspiring others to be more accepting of disabled people. His mother says that when you interact with him, you’ll get to see the world in a new and different way.

When you’re ready to have your child start playing piano you’ll want to buy them a piano from Dave’s Piano Showroom. Many customers have done so and found themselves very happy with the piano their child is using. Your child and their musical future deserve to be next so contact them today.