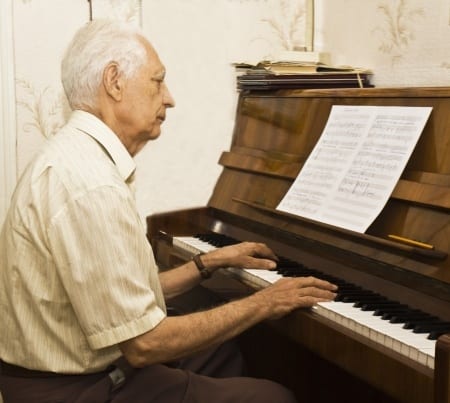 Fall-risk is an especially important, yet sometimes underplayed component in promoting the wellness of our seniors. Falls during old age can lead to terrible and permanent damage, often costing the healthcare system and society very large sums of money in turn. There are a number of precautions that the elderly and their caretakers can make in order to reduce the risk of falls. This includes everything from having safety handles in showers and stairs to giving dizziness-causing medications during times of low planned mobility. A new study suggests that an unlikely strategy may also help in this regard- playing piano music for the old.

Specifically, when community-dwelling seniors exercised to piano music, they showed significant improvements in gait, balance, and their rate of falling decreased. This is according to a new study in the Archives of Internal Medicine. The randomized control trial had two cohorts. One included people who underwent a six-month music-based multitask exercise program and the other which had a delayed intervention (the control group in the study). The class included a wide range of body movement exercises and coordinated to the rhythm of the piano music. Among the intervention group, there were 24 falls which put the rate at 0.7 per person per year compared to more than twice as much in the control group which had 1.6 falls per person per year.

The intervention group increased the speed of their walking, their stride length, and stride time variability. Those who had dual-task training compared to just one task performed even better. The researchers believe that the piano music allowed for a calming effect and one that helped make the program both more enjoyable as well as more natural. This program may be a prototype for further rollout in nursing communities and other environments with older people and has the potential to have a major impact on preventing falls and all of the unnecessary utility costs to society that result.

This is a major problem that is not going away right now and solutions like this are much needed to reduce the risks and to improve the lives of our increasingly older population. With the Baby Boomers coming of age and retiring, the healthcare system is already getting ready to withstand a shock in demand and this is a phenomenon that is taking place in many Western countries around the world including the United States, Japan, and Canada. As is, each year one third of the population over 65 years old experiences at least one fall with more than half of those having multiple falls. Exercise can help counteract these falls and help bring down this very scary and unsustainable rate. If you play the piano and are caring for an older parent or relative, it may be worth trying something at home. You can play for your loved ones while helping them live a healthier life style by improving their mobility and reducing their chances of hurting themselves. In the long run, it is a low cost option with a very high upside.