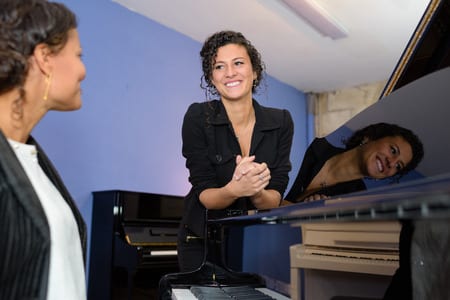 The stress-relieving and/or becalming effects of lending your ears to soul-stirring music are assertions that have been overwhelmingly proved and so these generalizations are beyond dispute. There is also substantial evidence to back up claims that if newborns and children grow up listening to classical music or symphonies by Mozart, Beethoven and Schubert, they’ll tend to become more cerebral. Quite mysteriously, scientific research and trials carried out to pinpoint the cognition, reasoning and intelligence-boosting properties of music have been not been conclusive enough.

Music is for all

It’s not only humans who’ve found music to be intellectually stimulating but even animals. Sergio Della Sala, a psychologist who authored the book ‘Mind Myths’ had been to an Italian farm producing mozzarella cheese where the farmer proclaimed with pride that his buffalo livestock was producing a better quality of milk following their listening to Mozart symphonies thrice every day. However, most such studies were conducted on young adults and the results of the trials proved listening, enjoying or learning any form or genre of music could noticeably sharpen your reasoning, learning, comprehension, and perception skills.

The kind of music you listen to matters

The essence lies in enjoying the music you’re listening to regardless of whether it is Mozart, Schubert or pop or even hard rock. However, simply treating your tympanums to music has an uplifting effect that is at best temporary or short-lived. The inspiring or stirring effects starts to wear off after approximately 15 minutes once you’ve stopped listening. In this respect, picking up the ropes of playing piano or violin can raise your IQ by several notches. If Jessica Grahn, a cognitive researcher at Western University, London, is to be believed, taking piano lessons on a regular basis for at least a year can improve your IQ by nothing less than 3 points.

Specific areas in your brain get aroused while you engage yourself in imbibing piano lessons. Numerous cranial processes are reinforced and expedited during rehearsals and practice sessions. For instance, the motor cortex monitors your fingers punching the keys, foot tapping, and dancing. Then again, the sensory cortex processes tactile (touch) responses resulting from playing the instrument as well as bopping. The prefrontal cortex plays a key role with regards to nurturing of instincts, satisfactions of urges or expectations or violation or non-fulfillment of hopes.

Music and its impact over Human Brains

Likewise, other areas of the human brain including the corpus callosum, nucleus accumbens, amygdala, auditory cortex, cerebellum, visual cortex, and hippocampus also perform more effectively when your fingers are on piano keys. Becoming adept in performing on a musical device or equipment spurs the brain in relation to spatial synchronization or coordination. Listening or better still imbibing playing instructions will help you solve jigsaw puzzles and complex mathematical problems, and connect pieces faster. Towards this end, taking lessons in classical music can go a long way.

Attending piano classes routinely also hone the brain’s auditory processing capabilities. Consequently, you’re able to make out distinctive sounds even in a cacophonic situation. Auditory memory (the capacity to recall poignant sounds you heard in the past). So, if you have a child who takes an unusual interest in his or her musical classes at school, there’s every reason for you to encourage the little one.