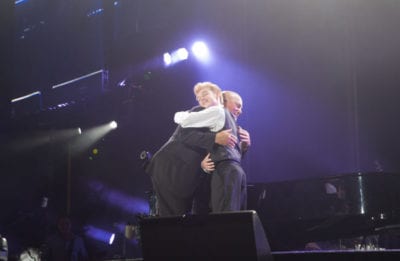 Bradley Bartlett-Roche, a young musician from Boston had the rare privilege of playing with his idol, none other than the legend himself, Billy Joel at a Thursday night performance at Fenway Park. Bradley is a special talent himself, having performed at the esteemed Faneuil Hall Marketplace when he was just ten! The now-thirteen-year-old described his experience with the Piano Man as “euphoric” and something that words could not describe. With the performance he took his young career to the next level and likely drew the envy of musicians everywhere.

Bradley is a long-time Billy Joel fan, having attended all of his concerts at Fenway Park for the last three years. He held up a sign at every performance and fueled a Twitter campaign to get the attention of the musical legend. And eventually it worked! Billy Joel invited the teen up on stage for one song- Root Beer Rag- Bartlett-Roche’s favorite. Joel also autographed the young man’s shiny shoes. It was a special moment for a special young person.

Bradley will continue to develop his musical skills as he follows his passion. He just completed a five-week musical program at the Berklee College of Music. He is also the new solo keyboardist for the school’s All-Star Rock Band. Longer term, he hopes to continue to write and play music with the laudable goal of one day spreading his music around the world and making a positive difference.

Bradley is an inspiring young man who can be an inspiration and positive role model for other children. His passion and determination have allowed him to accomplish a lot at a very young age and we should all celebrate his success. The gesture that Billy Joel made has only fueled the young man’s inspiration and has allowed the legend to make a positive difference himself by carrying forth a relatively small gesture.